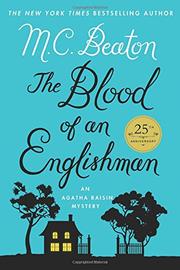 THE BLOOD OF AN ENGLISHMAN

Agatha Raisin is on the scene of yet another wacky Cotswold murder.

Despite her lack of formal training, Agatha’s made a success of her detective agency and, to the chagrin of the local police, solved many a murder. Her major weakness is her tendency to fall in love at the drop of a hat, sometimes with suspects in her cases. Although she’s attractive enough, she doesn’t think she is. Her latest misbegotten romance is ignited when she grudgingly accompanies her friend Mrs. Bloxby to a local pantomime whose ogre is played by the baker of Winter Parva. After he vanishes through a trap door, he’s found spitted and very dead in the area under the stage. Gareth Craven, producer of the show, hires Agatha to find the killer when he feels the police suspect him. Despite his weak chin, Agatha predictably finds him attractive despite his obvious interest in the baker’s dry-eyed widow, Gwen. As Agatha trawls for local gossip, she meets John Hale, a teacher slated to appear opposite Gwen in The Mikado. Although Agatha finds John even more attractive than Gareth, she’s distracted by a good-looking local farmer determined to marry her over the strenuous objections of his grown son. Agatha’s team, along with her former husband, James, and her pal Sir Charles, all pitch in to help with a case made ever more dangerous by a second murder and Agatha’s close approach to unmasking a killer.

Agatha’s 25th (Something Borrowed, Someone Dead, 2013, etc.) is another rollicking mixture of clever mystery-making and love gone wrong.