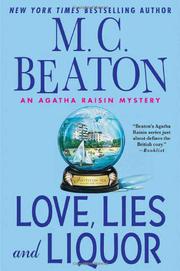 There’ll be no romantic interlude for Agatha Raisin, not even when her ex-husband invites her to join him at a beachfront hotel.

Dreaming as ever of a reconciliation with her off-again ex, James Lacey, Agatha (The Perfect Paragon, 2005, etc.) finds the rundown Palace Hotel in the depressing town of Snoth-on-Sea less than idyllic, even though James claims that he spent many happy hours there years ago. Soon after Agatha has words with one of the few guests, Geraldine Jankers, a loudmouthed, frowsy bleach-blonde who’s on her honeymoon, Geraldine is strangled with Agatha’s scarf, and the police pull her in for questioning. With the help of her detective-agency employees Harry and Patrick, Agatha finds that all three of Geraldine’s ex-husbands had spent time in prison. Charlie Black, just released from jail, may have left her with the loot from a jewel heist. Though Agatha’s still in love with James, his lukewarm attitude toward her makes it no great loss to send him off on a trip while she investigates a drug cartel. She escapes death more than once before the mystery, if not her messy love life, is brought to a satisfactory conclusion.

Detection takes a back seat to Agatha’s angst over her long-running amatory follies. Here’s hoping she’s finally dumped the selfish James for good and can get on with her sleuthing.