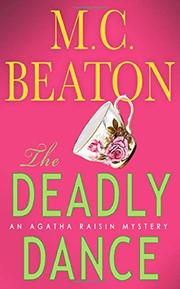 Agatha Raisin finally makes it official by opening her own private detective agency.

After years of dyspeptically ferreting out other people’s secrets (Agatha Raisin and the Case of the Curious Curate, 2003, etc.), the peerless village snoop is suddenly playing second fiddle to Emma Comfrey: the Golden Ager she takes on as secretary only to watch as she quickly finds Mrs. Evans’s strayed cat and Harry Johnson’s missing son. And when Agatha lands a big case of her own—mingling with the guests at well-heeled Catherine Laggat-Brown’s birthday party for her daughter Cassandra, who’s been threatened with death if she goes through with her wedding plans to stockbroker Jason Peterson—she’s dressed down by her client after pushing all three principals into a swimming pool. She pushed because she thought they were going to get shot. But wait! There really was a shooter, says DS Bill Wong, restoring Agatha’s reputation if not winning her universal esteem. By journey’s end, two separate assassins will be gunning for Agatha (a third having already been dispatched in her kitchen). Plus, her carnival of personal tribulations will have upstaged her professional caseload so completely that readers may be surprised when she actually names the perp. But then how many of Beaton’s fans pick up these adventures for their wildly tangled plots?

“I am a bitch, that’s what I am,” muses Agatha, whose biggest discovery in this effervescent bauble may be a spoonful’s worth of self-knowledge.