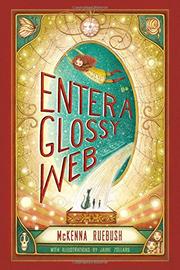 From the Gossamer Trilogy series, volume 1

This debut fantasy tests the theory that a great opening and closing number will cause an audience to forgive almost anything.

The novel ends with a spectacular battle, including a sword fight with skeleton bones. And the dialogue in the opening chapters is endlessly entertaining. Early on, George learns why Aunt Henrietta’s nickname is Chicken: “Chicken is long for Hen, which is short for Henrietta.” But the chapters in between are a standard-issue if ramblingly lengthy fantasy story, with characters searching for magical pieces of a talisman that will save the world from destruction. A few moments are gloriously odd, though, such as a scene in which a character reaches down a depressed dragon’s throat to ignite his pilot light. And the protagonist, George (she hates to be called Georgina), is always engaging. She’s as unfailingly polite as Alice was in Wonderland. The characters are just eccentric enough to keep people reading through the pedestrian chapters. (The human ones also seem to be just as white as the people in Carroll’s novels.) Hector, the dragon, is a highlight. He sticks up for his home world by saying, “We’re very cultured, you know. We have public-access television and ballets.”

This trilogy opener may not be consistently inventive, but there are enough peculiar, oddball moments to keep readers surprised from beginning to end.