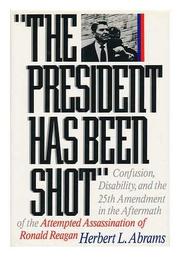 'THE PRESIDENT HAS BEEN SHOT'

Confusion, Disability, and the 25th Amendment in the Aftermath of the Attempted Assassination of Ronald Reagan

From a radiologist attached to both the Stanford Univ. School of Medicine and the Center for International Security and Arms Control—a provocative analysis of the constitutional problems presented by John Hinckley's March 30, 1981, attempt to assassinate Ronald Reagan. Abrams relates the story of Hinckley's drift into homicidal madness, underscoring how easily an apparently ordinary middle- class citizen like Hinckley can develop into a potential assassin. But what the author finds even more alarming is the confused and inadequate response of Reagan Administration officials to the shooting and to the requirements of the 25th Amendment regarding transfer of presidential power (e.g., Secretary of State Alexander Haig's erroneous announcement that he was to act as President)—and how, in their zeal to project the image of a strong President, these officials may have compounded Reagan's medical condition by having him accept visitors prematurely. Indeed, Abrams suggests that Reagan's aides, for purely political reasons, may have endangered the national security by failing to take advantage of the mechanisms offered by the 25th Amendment. For dealing with future similar crises, the author offers policy suggestions that take into account situations ranging from assassination attempts to the President's undergoing anesthesia during an operation. He suggests upgrading the role of the White House physician and seeking a more proper balance between physician-patient confidentiality, on one hand, and the national interest, on the other. An articulate and insightful examination of a problem with unlimited downside potential. (Photographs, drawings—not seen.)