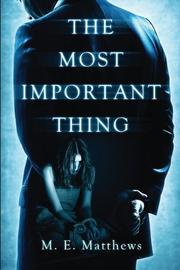 The Most Important Thing

A woman’s sudden disappearance exposes a slew of grim, bitter secrets surrounding her family in this debut thriller.

When Melanie Tate vanishes, her car abandoned in a store parking lot, Burke Lake Detective Stan Yates naturally zeroes in on her husband, Jeff. Cops often suspect the spouse, but Yates has good reason to. Jeff may have resented Melanie, daughter of late oil tycoon Harry Woodward, for stashing her hefty million-dollar inheritance, opting to save the money for their children. The couple’s 14-year-old daughter, Sara, is so sure of her father’s guilt that in a tweet she suggests that police check the backyard. Of course, authorities have security footage of someone snatching Melanie near her car. The culprit doesn’t look like Jeff, but Yates may have a way to link him to a convict locked up back when Melanie was employed at the Department of Corrections. Readers know that Melanie is alive, chained up in a basement by a man calling himself Brian and insisting her name is Brie. Brian believes that, if he holds her long enough, she’ll warm up to her captor, which may be working: Melanie alternates between herself and the Brie persona. Jeff, even if he’s not behind the kidnapping, is unquestionably hiding something from the cops. But he isn’t the only one, as family and friends know a lot more than they’re saying. The deceptively simple abduction plot gradually adds succulent details, like the fact that Melanie was fairly sure Jeff was having an affair. These eventually lead to numerous surprises that throw suspicion on Jeff as well as another character or two. At the same time, perspective from nearly every character, from the Tate twins to irrefutably creepy Brian, makes everyone at least capable, if not culpable, of something shady. Better editing would have polished the narrative, hampered a bit by grammatical inaccuracies. Frequent run-ons, for example, result in choppy sentences: “He was in the wrong place, at the wrong time Yates his whole life and this case was no exception.” But they’re never outright confusing and certainly forgivable once the twisty tale begins unraveling all the way to its startling conclusion.

A kidnapping tale dishes out edgy melodrama in the vein of a dark, unsettling soap opera.