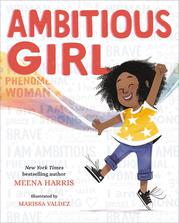 A little girl tells readers—and herself—all about the importance of being ambitious.

The story starts with a wordless illustration of a little brown-skinned girl with textured black curls stopping to watch television sets displayed in a store window. The TVs display a Black woman confidently speaking at a microphone. But while the girl appears impressed, the television commentators are not. They call the politician too “assertive,” “ambitious,” “confident,” and “proud.” The little girl looks devastated, but the politician on TV is not. In response to this criticism, she declares that no one can define us and that it’s up to us to define ourselves. The remaining pages are a poetic ode to ambition, beginning with the girl’s own insecurities about being told, repeatedly, to be quieter, duller, or more patient. Like the politician she admires on TV, the unnamed protagonist does not let this criticism stop her. Instead, she reflects on what she has—her supportive family, for example, and ambitious women who’ve gone before (depicted as the suffragists, Shirley Chisholm, and Mae Jemison)—and who she wants to be. Generally, the rhyming text is buoyant with hope, although some concepts feel on the abstract side for children: “And if we fail, it’s a chance to disrupt.” The soft watercolor illustrations amplify the book’s underlying messages of love and hope, filling the backgrounds with a multiracial cast of women diverse in age, sexuality, ethnicity, and ability. (This book was reviewed digitally with 10.7-by-16.4-inch double-page spreads viewed at 45.1% of actual size.)