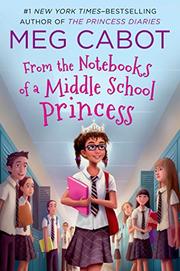 FROM THE NOTEBOOKS OF A MIDDLE SCHOOL PRINCESS

From the Princess Diaries series

Olivia's middle school worries get a lot easier when she gets the surprise of a lifetime.

The most exotic things about Olivia Grace Clarisse Mignonette Harrison are her long name, her talent for drawing, and the facts that her mother died when she was a baby and she's never actually met her father, who sends letters and gifts from all over the world. Other than that, she's pretty average. At least, that's what she thinks until a sister she's never met arrives in the schoolyard just in time to save Olivia from getting beaten up by Anabelle Jenkins, who used to be nice but whose desire for popularity is sprouting into bullying behavior. What's even more shocking is her lineage: pure princess! The best part of all? Meeting her dad for the first time. Cabot turns her Princess Diaries brand to a younger crowd, who will be thrilled to fall into the age-old fantasy of kids everywhere: what if my real mom or dad lived in a palace? Cabot manages to combine wit and lavish details to positive effect, as evidenced by a royal grandmother who manages to be both familiar and surprising. While readers who already know the Princess Diaries might find this fairy tale a bit too retold, young newcomers to the Cabot magic will be charmed.

A sweet fantasy, both funny and highly satisfying.