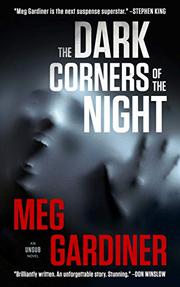 THE DARK CORNERS OF THE NIGHT

Los Angeles may not have snow at Christmastime, but it’s got the next best thing: a stone-cold serial killer who provides FBI behavioral analyst Caitlin Hendrix (Into the Black Nowhere, 2018, etc.) with her third, and perhaps most chilling, adversary.

What kind of person breaks into houses when the whole family is home, executes both parents, but leaves the children alive to live with their nightmares? Only someone, as Caitlin tells her boss, CJ Emmerich, who has “deliberately created surviving witnesses.” The Midnight Man, as he’s soon dubbed, dispatches four married couples, leaving behind such memorabilia as scrawled messages proclaiming “I am the legion of the night” and images of eyes drawn in blood on a baby’s forehead in suburban homes scattered around Los Angeles County before Caitlin, already reeling from the hospital bombing that nearly killed her best friend, ER nurse Michele Ferreira, catches her first real lead. Hannah Guillory, a plucky sixth grader, finds the Midnight Man attempting to break into her house, rouses her parents to call 911 before he gets inside, and then gives the task force assembled to catch him a description of the UNSUB—unknown subject—and his car that’s just detailed enough to suggest something truly shocking, and readily identifiable, about him. Sheriff’s Department investigator Gil Alvarez finds the theory Caitlin’s based on Hannah’s evidence too far-out to believe, but Caitlin herself is a true believer. Determined that she won’t be outmaneuvered by a killer who’s dramatically stepped up the pace of his murderous attacks, breached his self-imposed limits, and now threatens her star witness with abduction and worse, she hunkers down to catch a quarry whom she says is “like nothing I’ve ever dealt with”—as if she doesn’t know that descriptions like that just set the bar even higher for the inevitable sequel.

Gardiner has mastered the art of the serial-killer saga without an ounce of fat.

INTO THE BLACK NOWHERE
by Meg Gardiner
Fiction