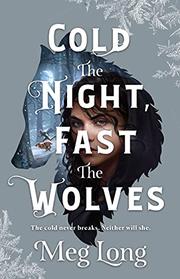 COLD THE NIGHT, FAST THE WOLVES

The only thing Sena wants is to save enough money to get off-world, far away from Tundar, an unforgiving planet of electrical storms and bitter cold. When she crosses a cruel crime boss, he offers her clemency—if she can rehabilitate his vicious, prizefighting she-wolf. It’s not a task she feels up to, but she has no other choice if she wants to escape to a better life. After a near-fatal turn of events, Sena finds herself in charge of the stolen she-wolf and agreeing to do the one thing she swore she’d never do: take part in a deadly 1,000-mile race to reach valuable exocarbon deposits, the same race that claimed her mothers’ lives five years before. Sena may not have a lot, but with the wolf Iska by her side, she has a lot to lose and even more to gain. The action scenes are so fast-paced as to cause whiplash, while quieter interludes slow down enough to allow readers to catch their breath. There is no romantic subplot—instead, the growing trust between Sena and Iska is the focus. The worldbuilding is intricate, and the icy setting is so detailed that readers will feel the need to bundle up as they speed through to the exciting and satisfying conclusion. Main characters are assumed White; some secondary characters have brown skin.