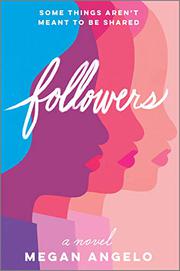 How far will our addiction to screens and our obsession with social media go? And how much will we pay for it?

The bill is large indeed in Angelo’s first novel. In alternating narratives beginning in 2015 and 2051, she creates two chilling versions of celebrity culture in techno-hell. It all starts with a post on a website called Lady-ish written by staff blogger Orla Cadden. “Sooo What Does The World’s Most Expensive Brow Gel Actually Do? One Instagram It Girl Finds Out” is the first of a series of pieces Orla concocts (down to scrubbing the writing off a tube of Maybelline for the photo shoot) to boost the profile of a wannabe Kardashian type—actually her roommate, Floss, whose drive to be famous in the absence of any talent or notable quality runs over everything in sight for the course of the novel. In the 2051 plot, we meet Marlow, a young wife in Constellation, California, a closed town populated with government-selected celebrities devoted entirely to the production of a reality show watched by everyone who does not live there. “Is it me or does Mar have kinda chubby armpits,” asks one of Marlow’s more than 12 million followers, watching her stretch before getting out of bed in the morning. “NOOOOOOO NO ONE WANTS TO WATCH ANOTHER PILL AD—PUT THE MARLOW FLAMINGO SMACKDOWN BACK ON!!!!!” screams another when Marlow gets upset with her network-issued storyline and throws a fit. Both the 2015 and 2051 plots revolve around a mysterious event called the Spill, which feels somewhat less original and interesting than the buildup to its reveal. However, the joy of the details continues all the way to a denouement in Atlantis (formerly Atlantic City), where the relationships we have begun to suspect between the characters of the two plotlines are untangled and confirmed.