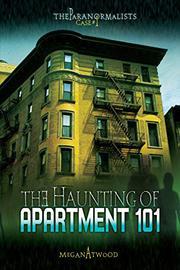 THE HAUNTING OF APARTMENT 101

From the Paranormalists series, volume 1

Two teen ghost hunters use their skills to solve a mystery in a haunted apartment house.

Jinx has always had a difficult time fitting in, beginning in middle school. However, by the time she is in high school, she has embraced her outsider status, even reveling in the negative way she is viewed by fellow students. Indeed, she’s even adopted the nickname they gave her, preferring it to her real name. Her one friend, Jackson, remains loyal to her despite his insider status as a member of the football team. Jinx spends her time pursuing her plan to use technology to investigate paranormal phenomena. When one of the girls Jinx particularly dislikes seeks help with mysterious events in her family’s apartment, she is extremely skeptical. Instead, it is soft-hearted Jackson who convinces Jinx this is a case they should take. Finally, Jinx will be able to use the equipment and research she has been working with for some time. This easy-to-read ghost story will grab reluctant readers with its intriguing plot, its quirky main character and her more straight-laced best friend. In addition to the plot’s twists and turns, all of the primary teen characters are coping with issues familiar to readers.

The cliffhanger ending with its human and supernatural components will lead fans to the next in the series, The Terror of Black Eagle Tavern, which publishes simultaneously.