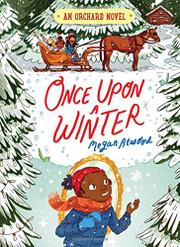 ONCE UPON A WINTER

From the Orchard series, volume 2

Sometimes a new place makes old friends into strangers, or so it seems to Peter Wu.

After his dads move him and his twin sister, Olive, from Boston to racially and ethnically diverse New Amity, New Hampshire, he becomes invisible. Olive spends all her time with new friends; Peter tags along and tries to join the conversation, but his voice is quickly drowned out. Feeling lonely and unheard, his only solace is playing “Elf Mirror,” a video game in which the player must save a mythical land from a dragon. A new classmate, olive-skinned Kai Delikatua, shakes things up at school when he walks into Peter’s language arts class. He is defiant and not afraid to speak up; he is also a fan of “Elf Mirror.” Peter decides that Kai will be his new friend. However, Kai’s idea of friendship is a bit too daring for Peter, and he might not be the perfect playmate. But is it too late for Peter to rekindle old friendships? Atwood’s latest in the Orchard series is an empathetic journey through Peter’s struggle to find his voice, and readers will recognize his trouble interpreting murky emotions. They will also appreciate seeing how the patience and understanding exhibited by his fathers create a safe space for Peter to explore his feelings and experiences. Andrewson’s illustrations add a whimsical charm to each chapter, depicting Peter and Olive as black.