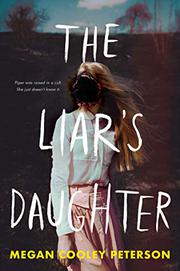 Piper believes in the Community: Mother and Father have established strict rules that keep everyone safe. Even if all the rules do not make sense—bleaching hair, digging graves, being told whom you will marry—Piper faithfully believes. When government agents enter their compound and she and the others are taken to the Outside against their will, she will do anything to go back. However, she has been sent to live with a woman who tells her that she is her real mother and that Piper was taken from her as a child. Peterson (The Angry Alien, 2017, etc.) weaves a lush novel full of cryptic scenes divided into “before” chapters showing Piper’s life in the cult and “after,” when she is set free, which readers fit together for a thrilling ending. The novel presents an accessible look at what makes cults (especially religious ones) attractive to some, and it will appeal to those interested in subjects such as Charles Manson and the Branch Davidians. As readers follow Piper through therapy, they learn that while memories can be unreliable, they can trust their feelings and listen to their instincts. Piper finds that while time might not heal all wounds, supportive friends, family, medication, and therapy will help. Characters are assumed white.

An intriguing look at a young woman adjusting to life outside a cult.