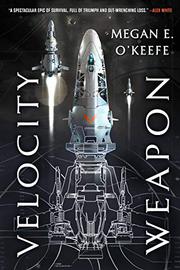 O'Keefe turns from fantasy novels (The Proposal Game, 2018, etc.) to sci-fi with the story of a spacefaring soldier who wakes up on an enemy ship alone—save for the ship itself.

The last thing Sanda Greeve remembers is her ship being attacked by rebel forces. She's resuscitated from her evacuation pod missing half a leg—and two centuries—as explained to her by the AI of the rebel ship that rescued her. As The Light of Berossus—aka Bero—tells her, she may be the only living human for light-years around, as the war wiped both sides out long ago. Sanda struggles to process her injuries and her grief but finds friendship with the lonely spaceship itself. Sanda's story is interspersed with flashbacks to the war's effects on her brother, Biran, as well as scenes from a heist gone terribly wrong for small-time criminal Jules. The three narratives, separated by a vast gulf of time, are more intertwined than is immediately apparent. When Sanda rescues Tomas, another unlikely survivor, from his own evacuation pod, she learns that even time doesn't end all wars. Should she trust Tomas, a fellow human but a rebel soldier who has his own secrets—or Bero, the ship that saved her? It's the first twist in a story that fires them like railguns. Every hard-earned victory for Sanda, Biran, or Jules is turned on its head as new information is revealed, and the tension is as tight as the pressure seal on a spacesuit. Yet the story still makes room for the classic questions of science fiction: What counts as a person, and what does it mean to be humane at any time, let alone in wartime?