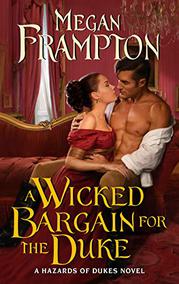 A WICKED BARGAIN FOR THE DUKE

From the Hazards of Dukes series, volume 3

A marriage of convenience starts with a negotiation and delivers more than either party agreed to.

Thaddeus Dutton, Duke of Hasford, doesn’t want much. Just a woman who is “unassuming in looks and manner,” “able to immediately handle her duties as his duchess,” and, the last item on his list, able to “engage satisfactorily in sexual congress.” As soon as he starts looking, he’s already found her: Lady Jane Capel. The trouble is that her sister, Lady Lavinia, knows that Jane is already in love with another, so she inserts herself in their courtship. Lavinia herself is not set on marriage, preferring to devote herself to her secret career as a popular author. But when an accidental tumble lands them in a very comprising, very public position, Lavinia does succeed in keeping Thaddeus from marrying Jane, because she’s soon married to him herself. Both spouses are reasonable and willing to bargain to make their marriage of convenience work, and they agree that once an heir is born, they will go their separate ways, as they are complete opposites. Their initial couplings are less than satisfactory for Lavinia, but she quickly sets Thaddeus straight, and they unlock a powerful chemistry. As they spend evenings together fulfilling their bargain, they come to realize they have much more in common than they thought and begin to privately fall for each other—but each fears they are the only one who wants to renegotiate their agreement. As in previous entries in Frampton’s Hazards of Dukes series, Thaddeus and Lavinia’s story is a charming combination of steamy, funny, and warmhearted. It’s thrilling to read a romance heroine who’s not afraid to directly say “I would like to have more fun doing it”  and a hero who’s not offended by the request but is, rather, happy to oblige. As in previous books, Frampton combines the best elements of classic Regency with contemporary touches. The story stands alone well enough, but fans of the first two books will be especially pleased.

Frampton has written another historical romance that feels classic while also respecting the expectations of modern readers.