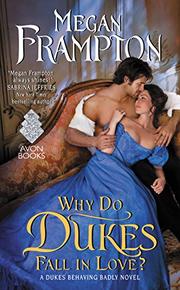 WHY DO DUKES FALL IN LOVE?

Sleeping with the boss has never seemed so appealing.

Michael, Duke of Hadlow, has everything he needs except a secretary. Never one to stand on convention, he hires Edwina Cheltam, recently widowed, who is desperately in need of a job to support herself and her daughter, Gertrude. The brusque and logical duke seeks efficiency above all else, and as Edwina is the best candidate despite being a woman, she and Gertrude move into his house and get to work. Though Michael and Edwina are instantly attracted to each other, they ignore it in order to work together, until they embark on a mutual seduction that they know can never be “anything more than what it is.” With chapters punctuated by reasons dukes fall in love ("26. Because no one dares to tell them they shouldn't"), the story moves Michael and Edwina from feelings of lust to a blossoming love that neither can admit and which ultimately drives them apart. But when Gertrude is kidnapped by Edwina’s former brother-in-law, Michael may be the only one who can save her. The fourth full-length book in the Dukes Behaving Badly series is as smart as its unusual duke, and Frampton’s witty banter is bested only by several back-to-back scenes that prove how erotic safe sex can be. Details about Regency-era railroad business add a touch of realism to this Cinderella tale, and readers will enjoy a hero who is lovable in different ways than the average aristocrat.