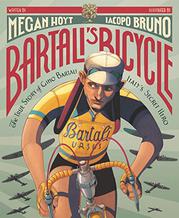 The story of an Italian cyclist whose work with the Resistance in World War II earned him the designation of “Righteous Among Nations” from Yad Vashem, Israel’s Holocaust Remembrance Center.

Gino Bartali was a professional cyclist and had already won the prestigious Tour de France when World War II broke out. Dismayed by the rhetoric and aggression against Jews (and he counted many Jews as his close friends), Bartali made the decision to work for the Resistance, hiding fake identity papers in the hollow handlebars of his bicycle and, on his training rides, delivering them to families in danger. He also used his celebrity to create disturbances at train stations—distracting the soldiers so families being deported could board other trains—and even hid a close friend’s family in his basement. Afterward, Bartali never spoke about it, saying “Good is something you do, not something you talk about.” The text does a good job of relaying Bartali’s actions and his role-model courage, but the illustrations really set this picture book apart. Each one is an overall accomplished design in the mode of early cycling posters that brings readers’ eyes in, around, and to the page turn. The use of highlights and shadows to both delineate objects and to evoke mood and atmosphere is masterful. Bicycle details are accurate to the time period, as is Bartali’s cycling kit—a welcome attention to detail that enhances the story’s authenticity. A note from Bartali’s granddaughter appears in the backmatter.

A well-made story and a welcome, timely reminder of what true courage is.