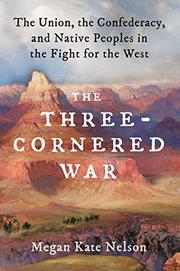 The Union, the Confederacy, and Native Peoples in the Fight for the West

The fight between North and South comes West.

Nelson’s (Ruin Nation: Destruction and the American Civil War, 2012, etc.) cast of characters reads like a John Ford film cast, featuring Mangas Coloradas, Kit Carson, and, in a cameo appearance, Geronimo. Added to it are lesser known figures such as John Baylor, a Texas rancher who became a Confederate, and James Henry Carleton, an agile foe on the Union side. The setting is New Mexico Territory, with a breakaway Arizona in favor of slavery and a nearby California founded as a free state. At the beginning of the Civil War, Baylor, writes the author, “became the first Confederate to lead a successful invasion of Union territory in the Civil War.” He captured a Union fort and threatened others before being relieved of command, in part because he had issued a no-quarter call against “renegade” Apaches. The Union Army eventually gained supremacy in the field with the arrival of columns from California and Colorado and victories in fights with Confederate forces, but federal forces then continued the war against the Apaches and Navajos to make the “three-cornered war” of which Nelson writes. That war took savage turns with the murder of Apache leader Mangas Coloradas, whose head was removed by a Union surgeon and boiled in a large kettle until “nothing but the skull was left.” It was a gruesome souvenir but not the only atrocity of the campaign. The war in New Mexico did not last long, with a “multiracial army of Union soldiers” composed of Hispanic New Mexicans and newcomer Anglos placing the territory firmly under Northern control by 1862. Nelson is a touch florid at times (“their stories reveal how the imagined future of the West shaped the Civil War, and how the Civil War became a defining moment in the West”), and most elements of her story are well known to students of the history of the American West. She does a good job of setting them in a coherent, if never particularly rousing narrative.

A useful survey for readers interested in the Civil War in its short-lived southwestern theater.