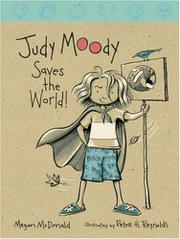 McDonald’s irrepressible third-grader (Judy Moody Gets Famous, 2001, etc.) takes a few false steps before hitting full stride. This time, not only has her genius little brother Stink submitted a competing entry in the Crazy Strips Band-Aid design contest, but in the wake of her science teacher’s heads-up about rainforest destruction and endangered animals, she sees every member of her family using rainforest products. It’s all more than enough to put her in a Mood, which gets her in trouble at home for letting Stink’s pet toad, Toady, go free, and at school for surreptitiously collecting all the pencils (made from rainforest cedar) in class. And to top it off, Stink’s Crazy Strips entry wins a prize, while she gets . . . a certificate. Chronicled amusingly in Reynolds’s frequent ink-and-tea drawings, Judy goes from pillar to post—but she justifies the pencil caper convincingly enough to spark a bottle drive that nets her and her classmates not only a hundred seedling trees for Costa Rica, but the coveted school Giraffe Award (given to those who stick their necks out), along with T-shirts and ice cream coupons. Judy’s growing corps of fans will crow “Rare!” right along with her. (Fiction. 8-10)