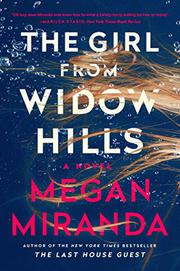 THE GIRL FROM WIDOW HILLS

Arden Maynor was only 6 when a traumatic event changed her life forever.

Twenty years ago, Arden, who now goes by Olivia Meyer, was swept into Widow Hills, Kentucky’s underground system of pipes during a deluge and was trapped for three days before she was miraculously rescued. The rescue effort was immense, as was the media coverage. Support, monetary and otherwise, for little Arden poured in. Not all of the publicity and attention were good, however, and Olivia, who remembers very little about those three days, has been trying to put the entire incident behind her for a decade. Now she’s a hospital administrator in rural Central Valley, North Carolina, and is starting to feel that the worst is behind her, until she wakes up outside her home after a sleepwalking episode, the same thing that preceded her childhood ordeal. The sleepwalking incident sets her alarm bells clanging, but then she’s approached, in public, by a man who seems to know exactly who she is. She hasn’t even told her closest friend and co-worker, Bennett, about her past. When she awakens outside again one night, there’s a man’s body at her feet and blood covering her hands. The dead man turns out to be a blast from Olivia’s past, and now the police are involved. But Olivia isn’t about to let everything she’s done to put her past behind her come crashing down, even it means opening a Pandora’s box full of secrets that may have been better off left in the dark. Miranda nimbly mines underexplored terrain: the long-term aftermath of dramatic, highly publicized rescues. Olivia's desire to live a life undefined by that one event is relatable, and her amnesia about those three days lets Miranda flaunt her considerable talent for jaw-dropping, yet believable, twists. Even jaded readers might not see this one coming.

An unusual heroine anchors this creepy, fast-paced chiller. This is Miranda’s best book yet.