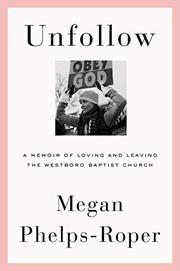 A Memoir of Loving and Leaving the Westboro Baptist Church

A religious and political activist tells the story of how she grew up in and then left the extremist Westboro Baptist Church.

As the granddaughter of the church founder, Phelps-Roper grew up in a large, tightly knit family that believed “God ruled via the parents and elders.” What that meant in practice was that she had to assimilate a church culture emphasizing “the celebration and mockery” of the tragedies that befell nonbelievers. Throughout childhood and adolescence, Phelps-Roper lived a double life. At school, she was a dedicated student who kept matters of faith out of her discussions with teachers and classmates. Outside of school, she and the members of her church community were vocal protesters against homosexuality, adultery, and the morally bankrupt nature of society. When Westboro's “picketing ministry” brought it into the media spotlight, Phelps-Roper became one of the most visible spokespeople for the church. As a young adult, she traveled all over the country to show “that the Bible really did say what [the Westboro Church] claimed it did.” By 2011, she became her church’s voice on Twitter, where she routinely “bait[ed] celebrities with anti-gay messages” and celebrated such tragedies as the Fukushima nuclear disaster. She also started communicating with an anonymous lawyer who engaged her in intelligent and respectful theological debate. As she began questioning her religious beliefs, she realized that she was also falling in love with the lawyer, who eventually became her husband. Phelps-Roper soon found she could no longer support the cruelty and “all or nothing” nature of her faith. After Westboro leadership became even more conservative and hypocritical, she and a free-spirited younger sister made the excruciating decision to leave both the church and their family. Eloquent and entirely candid, the book offers an intimate look at a controversial church while telling the moving story of how one woman found the courage to stand against the people and beliefs that she held dearest.

A heartfelt and richly detailed memoir.