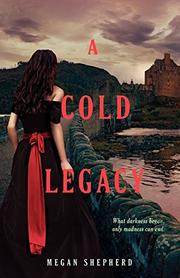 From the Madman's Daughter series, volume 3

The mad scientist’s daughter, Juliet Moreau, must flee or fulfill her diabolical biological destiny in the ghoulish series ender.

After releasing monsters to kill three members of the King’s Club, Juliet and her unhappy band of misfits seek refuge in Elizabeth von Stein’s Scottish sanctuary. Edward Prince tries to recover from his self-poisoning and to battle his inner Beast, while Lucy Radcliffe frantically seeks unorthodox methods to save her split-personality lover. Montgomery James and Juliet want to marry—much to the delight of the mostly female and mysteriously mutilated household staff—but both deny and fear that she may be taking up her father’s trade. Elizabeth invites Juliet to study Victor Frankenstein’s rules for reanimation, but even the spectacularly unsettling child-thing, Hensley, cannot dissuade Juliet from (impossibly advanced) scientific experimentation. While Juliet’s ad nauseam struggles over her inheritance may grate, her determination to redefine herself, defend her friends and destroy her foes is riveting. The story employs clichéd Gothic horror elements—castles, odd servants, a Romany girl, a windmill and a windswept countryside—and relies heavily on Frankenstein and The Island of Dr. Moreau, threatening to fall under its predecessors’ shadows. However, Shepherd (albeit anachronistically) addresses gender issues, English-Scottish politics, class divisions and medical ethics, ably intermixing them with horrific, romantic and comedic moments.

Daddy issues aside, a creepy and compelling tale.