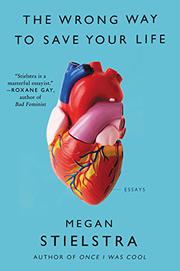 THE WRONG WAY TO SAVE YOUR LIFE

Perhaps not lifesaving, but a life-enriching collection of essays by a conscientious writer and teacher who knows that asking the right questions is more important than having all the answers.

Stielstra (Once I Was Cool, 2014) has often performed her pieces as well as published them, and her strong sense of voice and engagement with her audience reflect that experience. She is an ardent feminist, but her pieces rarely seem exclusionary; they are not directed toward any particular gender, race, economic class, generation (though rites of passage in 21st-century bohemian Chicago figure heavily), or even political persuasion. The author wants people to communicate, to connect, and to face their fears, not only of each other, but the ones deep inside. When she was in the process of losing her job within the writing program at a college where she’d spent almost two decades, she writes, “I outlined a book proposal, a collection of essays about fear.” That proposal became this book. So what is she afraid of? Writing. Those who might be offended by her writing. Not writing well enough. Falling in love. Getting married. Having a baby. Cancer. Men who grope. Her response to men who grope. Sex. Not enough sex. Sex with the strings of love attached. Mortgages. Property values. Her dad’s heart and his hunting adventures in Alaska. Guns. When her young son asked what an essay is, she responded, “It’s a kind of question.” He responded, “Okay. Did you find the answer?” After having her baby, Stielstra asks, “How do you write about depression in a way that’s not depressing?” Her own essay is the answer. She also maintains, “at some point, our education no longer belongs to teachers. It belongs to us.” The author sounds like a marvelous teacher, and her collection offers plenty of teaching moments.

In a style that is literary but never pedantic, Stielstra has crafted a collection that has such a sense of continuity that it could pass as a memoir.