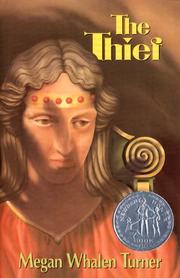 From the Queen's Thief series

A thief's quest for a priceless gemstone forms the background for a tale of redemption, tolerance, and cooperation in this first novel from Turner (Instead of Three Wishes, 1995, etc.). Gen the thief is released from prison in the imaginary medieval land of Sounis by the king's magus, on the condition that he join an expedition to recover the legendary Hamiathes's Gift Stone, said to be hidden in an elaborate maze underneath a river. For the chance at regaining his freedom, Gen agrees. The journey at first is fraught more with psychic than physical dangers: The magus and the other king's men on the trip—soldier Pol, aristocrats Sophos and Ambiades—insult Gen for his low birth and choice of profession, even denying him proper food and medical care. No adolescent will be able to ignore Gen's resentment, embarrassment, and pain, made palpable through Turner's compassion and crystalline prose. Similarly, Gen's narrative voice, at turns snide, sharp, then sad, will seem familiar to young adults. His ultimate discovery of the legendary stone and the clearing of his reputation are as grand as the fantastic myths the travelers tell on their fateful trip. This is an uplifting book, a literary journey that enriches both its characters and readers before it is over. (Fiction. 10+)