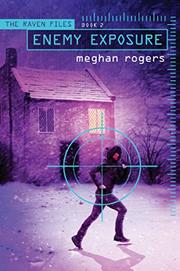 From the Raven Files series, volume 2

Teen spy Jocelyn recruits double agents from KATO to gain intelligence, but can she trust them?

Jocelyn Steely, now code-named Raven, has a new mission at the International Defense Agency. She and Travis (code name: Scorpion), her former enemy–turned-confidant, must find Eliza Foster, an English girl kidnapped by KATO as leverage against her weapons-expert father. The situation is personal: Joss was taken for similar reasons. She’s still haunted by PTSD and a lingering addiction to the drug Gerex. A decoded North Korean message pins the future of KATO’s training and control on Eliza, and when Joss extracts the girl from a safe house in Russia, it’s clear that different evils were done to her. Eliza wasn’t honed into a brutal weapon—she was an experiment. Joss decides that the only way to thwart KATO and learn the nature of what was done to Eliza is to recruit double agents. But not everyone at the IDA trusts making deals with KATO, and Joss risks being caught with the promise of no rescue regardless of new alliances. Joss’ latest mission is filled with well-paced intrigue, making for a suspenseful page-turner. However, the much-hyped North Korean agents bend to her will too easily, and attempts to build a relationship with her once-estranged father read as ancillary to the plot. For all that this is a story about North Korean espionage, racial differences are oddly downplayed; Joss, Travis, and Eliza are all evidently white.