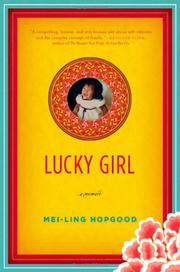 Buenos Aires-based journalist Hopgood looks back at her reconnection with the Chinese parents who gave her up for adoption.

After arriving from Taiwan as a baby in 1974, the author lived an all-American life in the Michigan suburbs with two adoring parents and two adopted Korean brothers. She had recently graduated from college and started work as a reporter at the Detroit Free Press in 1995, when she met the nun who had arranged her adoption. Sister Maureen persuaded the initially reluctant Hopgood to make contact with her birth family, and correspondence eventually led to a 1997 visit to Taiwan. An imperious father, a docile mother, six chattering sisters and an adopted brother welcomed her. She reveled in the intimacy of sisterhood and the cacophony of an extended family, and its secrets unfolded over time. Her biological father was obsessed with having a son, as Chinese tradition dictated. But the baby girls kept coming, so he pressured his wife to put up two of them for adoption—Hopgood and a younger sister who ended up in Switzerland. The boy they adopted in hopes that he would continue the family name was mentally impaired by a childhood fever. (When the author visited, he was still living at home, with few prospects for marriage.) After that, Hopgood learned, the father brought another woman to live with them, but she didn’t bear a son either and eventually left. On a visit in 2004, the author had another shock. Her father had recently confessed to having a son with yet another woman, now dying of cancer, and bullied his wife into allowing the boy to live with them. Hopgood grew to love her sisters, but she had a harder time with her deeply flawed father and maddeningly passive mother; she still thought of her adoptive parents as her true mom and dad. She writes with humor and grace about her efforts to understand how biology, chance, choice and love intersect to delineate a life.

A wise, moving meditation on the meaning of family, identity and fate.