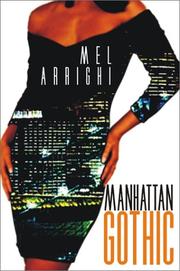 Carl Hopkins, the narrator of this creaky, predictable melodrama, is a third-rate N.Y. writer--bitterly divorced, near-broke, without a glimmer of an idea for a new novel. Then, however, Carl meets gorgeous, 30-ish Mirella Ludovish, a penniless Italian aristocrat who has inherited the fortune--and the townhouse--of her late fiancâ€š: millionaire-scholar Tobias Walling. Soon, of course, innocent Carl (a sort of Daphne du Maurier heroine in male drag) is having an intense affair with Mirella, who seems ""to have an animal hunger for sex."" Furthermore, Carl secretly starts writing a roman clef about Mirella, focusing on the dark tragedy in her past: some years back Mirella's adulterous mother murdered an unfaithful lover (and entered a madhouse). It doesn't take long, then, for ugly questions to arise, tainting Carl's glitzy idyll with Mirella. Did she (as many believe) murder Tobias, using a rare poison to simulate death-by-heart-attack? Is she harboring her mad mum, recently escaped from the asylum? What about her sadistic, kinky, decadent streak? Above all: does she cling to Carl (who has a sane, devoted girlfriend on the sidelines) because of passion. . .or creepy ulterior motives? The windup to this derivative tangle--which also features a murdered blackmailer--manages to be both wishy-washy and contrived. Carl's buzz of conflicting motives (ambition, erotic obsession, quasi-decency) is never even half-convincing, let alone sympathetic. And though Arrighi's junk-food prose is larded with clichâ€šs from gothic/porn genres (""I felt a honeyed ache surge in my crotch""), it never quite rises to parody--while failing to provide the brio of good honest trash.