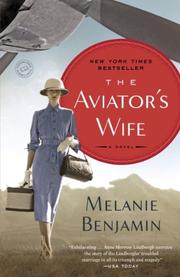 Anne, self-effacing daughter of a suffragette and an ambassador, is surprised when Charles, already a celebrity thanks to his first trans-Atlantic flight in 1927, asks her—instead of her blonde, outgoing older sister Elisabeth—to go flying with him. And it is Anne whom Charles will marry. At first, the glamorous couple’s life consists of flights all over the world: Anne becomes a pilot and navigator and Charles’ indispensable sidekick. However, when in 1932 the Lindberghs' first child is kidnapped from his nursery, the resulting press furor almost destroys Anne. In addition to her grief over her lost firstborn, a grief that Lindy doesn’t appear to share, Anne suffers the downside of fame as public adulation turns to prurient sensationalism. The couple takes refuge abroad, where they enjoy the orderly routine and docile press of the Hitler regime, as long as Charles is willing to accept a Nazi medal and attend rallies. However, Kristallnacht proves too much even for Lindbergh’s anti-Semitism, and he and Anne return to the States as war threatens. As more children arrive, Anne is beginning to bridle at Charles’ domineering ways, however the aspiring author is too insecure to contradict him even as he offends her liberal friends and family by siding with right-wing groups who claim that the Jews are trying to force America into war. At Charles’ behest, and against her own principles, she pens The Wave of the Future (1940), an isolationist screed which renders her anathema to the intelligentsia: Even her alma mater, Smith College, disowns her. In 1974, after 47 years of wedlock, Anne must decide whether to finally confront her husband. Although the portrayal of such a passive character could easily turn tepid, Benjamin maintains interest, even suspense, as readers wonder when Anne’s healthy rebellious instincts will burst the bonds of her dutiful deference.

A thoughtful examination of the forces which shaped the author of Gift from the Sea.