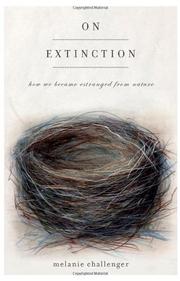 How We Became Estranged from Nature

A deep look at the human capacity for extinction twined with roamings to the far ends of the earth, from poet and fledgling natural historian Challenger (Galatea, 2006, etc.).

Spurred by her lack of belonging to a particular place and her sense of alarm over her ignorance of the natural world, the author struck out to investigate how such a mindset could lead to extinction of both creatures and cultures. She has a rangy curiosity that extends well past ignorance and alienation as the sole agents of the man-made extinction. As she travels from abandoned whaling stations on South Georgia Island to the wildness of Bird Island to the fraught lifestyle changes afoot in Nunavut, she examines such ideas as nostalgia being a trigger for extinction; the effects of a Hobbesian industry of survival; a grief-stricken burying of the past in a headlong rush that devastates nature; the notion, from early Christianity to Locke, of dominion; the rise of industrialization and globalization, in the process squashing the intimate and particular relationship with a place, that feeling of safety and confederacy with the land. She faces the elemental question of exactly what is natural, when all is in flux to the turbulent, indefatigable forces of change. What rises so pungently from her travels and ruminations are the vanishing cultures, the ways of life that capture the idiosyncrasy of place, how “[t]his move from distinctive cultural knowledge born of the varied attributes of landscapes to the universal cultural knowledge of technologies available worldwide is akin to the disappearance of diversity in nature.”

A formidable inquiry into why the marvels of nature and the distinctiveness of cultures are constantly imperiled.