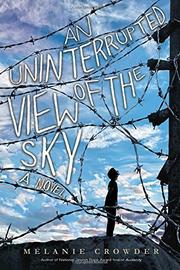 AN UNINTERRUPTED VIEW OF THE SKY

Francisco, a middle-class Bolivian high school senior, and his younger sister must move into a dangerous prison after their indigenous father is wrongfully arrested.

Inspired by real events, according to an author’s note, Francisco’s tale is set in 1999 in Cochabamba, Bolivia. The 17-year-old son of a light-skinned, college-educated mestiza and an indigenous taxi-driver father, Francisco is smart but hot-tempered. He knows he’s privileged enough to go to high school and play pick-up soccer with friends instead of having to work, but he’s also painfully aware that’s he’s too short and dark (unlike his fair Mamá and 12-year-old sister, Pilar) to be taken seriously by Bolivia’s white elites, who don’t see beyond his dark skin and Aymara face. Francisco’s life takes an irreversible turn when Papá is falsely arrested under “the 1008,” a draconian drug law. An unimaginable betrayal leaves Francisco and Pilar no choice but to live in San Sebastián prison, which permits inmates’ spouses and underage children to reside inside. Readers will feel utterly invested in Francisco’s various challenges: protecting his sister from prying eyes; worrying about his gentle, poetic father in a tough, soul-sucking place; finishing high school; and figuring out whether to take Pilar to their peasant grandparents’ Andean village on the Altiplano (high plains). There’s also a sweet, slow-burning romance between Francisco and a quiet young woman with a hidden ferocity that terrifies, enthralls, and inspires him to write Neruda-esque poetry.