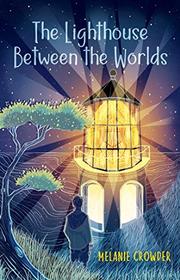 THE LIGHTHOUSE BETWEEN THE WORLDS

Griffin Fenn and his father, Philip, enjoy a quiet life looking after a lighthouse on the Oregon coast.

Suddenly, their calm, ordered world is shattered by the arrival of the mysterious Society of Lighthouse Keepers. The Keepers need Philip’s help with the light’s lens, which Griffin learns is a portal linking Earth to seven other worlds. After reluctantly agreeing, Philip disappears through the portal, leaving Griffin on his own with the Society and its dubious intentions. Griffin turns to his dad’s journal, his late mother’s bedtime stories about imaginary worlds, and his own knowledge of glass to find his way through the portal. The portal takes Griffin to Somni, an invading world where wicked priests control an entire populace with stolen magic. Then Griffin meets Fi, a member of a covert group of revolutionaries who have evaded the spell and are planning to bring down the priests. If Griffin wants to rescue his dad, he’ll have to join the resistance. The smooth third-person narration moves back and forth between Griffin and Fi. They are both resilient, self-reliant, and determined; readers will cheer them on until the end. Action is well-paced, making for a fast read that ends too soon. The book’s diversity isn’t among the people of Earth, who present white, but among the denizens of the different worlds.

The cliffhanger ending leaves the portal open for a sequel; with luck, readers won’t have to wait long for Book 2.