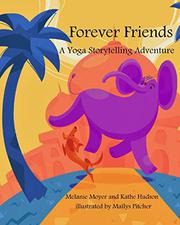 From the A Yoga Storytelling Adventure series, volume 2

A gray and purple royal elephant has everything he could wish for—except a friend. Then a stray dog enters the palace grounds and asks to share the elephant’s food, and the two form a bond. Later, a merchant visiting the palace takes the canine away, which leaves the elephant bereft. It’s only after the palace adviser explains the elephant’s heartbreak to the king that the two animals are reunited once again. Moyer and Hudson, the authors of the previous Yoga Storytelling Adventure The Impossible Dream (2017), offer a simply told story in accessible English with a few Hindi words, defined in an introductory glossary. All of the human characters refreshingly try to do their best; they realize their error in separating the animals and react with kindness. Pitcher’s playful illustrations beautifully show the elephant’s emotions; when she and the dog meet again, the elephant’s coloring changes to a joyful purple-pink. At the end of the book, Moyer and Hudson, both yoga teachers, clearly encourage young readers to do yoga poses named after the story’s characters, including the elephant, the king, and the dog.

A pleasant tale of friendship with a happy ending—and extra yoga inspiration.