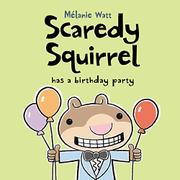 SCAREDY SQUIRREL HAS A BIRTHDAY PARTY

From the Scaredy Squirrel series, volume 5

When Scaredy Squirrel plans a party, he concentrates on maximum security, not maximum fun. His checklist: "Confirm date of birth; pick a safe location; choose party colors; get tuxedo dry-cleaned; prepare cake recipe; practice breathing (to blow up balloons/blow out candles); mail party invitation to myself." That's right—there’s only one guest at Scaredy's birthday party, and it's himself. But when his chum Buddy sends him a birthday card, he reconsiders his guest list to include his pal, even making the momentous decision to hold his party on the ground instead of in his tree. Replete with the lists and diagrams that are this OCD rodent's hallmarks, the story unfolds with both humor and some useful etiquette tips. From conversational gambits (good: "If you were a tree, what type of tree would you be?"; bad: "Is that a muskrat on your head? Oops... it's a toupee") to the "dos and don'ts of partying" (do: sit quietly; don't: double-dip), kids will find much to laugh at and think about. Typically (for a Scaredy adventure), despite a plan so complete it includes tooth-brushing breaks, a surprise happens—party animals show up! Watt’s wry digital illustrations make the most of the perceived mayhem, using a host of graphic conventions to tell her story. There's no question it's a formula by now, but it's still a winning one. Many happy returns, Scaredy. (Picture book. 4-8)