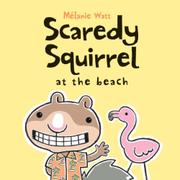 SCAREDY SQUIRREL AT THE BEACH

Scaredy Squirrel’s come a long way since he plunged out of his nut tree in his 2006 self-titled debut. With the aid of some props (kitty litter, inflatable pool, plastic flamingo), he has created his own private, safe beach at the foot of his nut tree. But when he realizes that he is missing “the soothing sound of the ocean,” he decides to make the dangerous journey to the real beach to fetch back a shell. Watt employs many of the same devices that have made Scaredy Squirrel’s outsized fears and outrageous defenses both recognizable and hilarious: A plethora of protective equipment—helmet, boots, rubber band—guard against a bevy of beach dangers—tons of falling coconuts, tribes of jellyfish, mobs of lobsters—when Scaredy mails himself to the seaside. The signature illustrations, generated in Photoshop, provide plenty of visual jokes for readers to chuckle over as Scaredy follows a protocol as tortured and formulaic as a passage through airport security. If said formula threatens to become stale with overuse, Scaredy’s anxieties and his ridiculous solutions remain fresh enough to delight with this salty offering. (Picture book. 4-8)