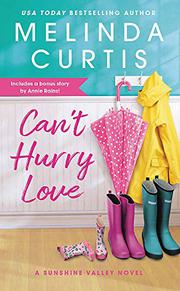 A widow burned by love gets tangled up with a small-town sheriff in this contemporary romance series starter.

Lola Williams’ first real encounter with Sheriff Drew Taylor is when he catches her burning her late husband’s underwear in a front-yard bonfire. The spectacle even attracts the very curious Sunshine Valley Widows Club, who soon adopt the mission to get the two unlucky-in-love people together. Lola gave up her dreams and lucrative career in New York City to move to her husband Randy’s small hometown of Sunshine, Colorado. It’s only after his death that she discovers he was quite the philanderer. Meanwhile, Drew’s wife had no problem leaving him and their daughter high and dry. It’s understandable why both Lola and Drew would feel jaded and cynical at the prospect of dating, especially since the small-town atmosphere lends itself to plenty of gossip. Lola’s discoveries about her husband, though, are just the tip of the iceberg, and it’s Drew to whom she turns to find out more about Randy’s double life. Despite the heaviness of a spouse’s death and the bitterness that may come with such intense heartbreaks suffered by both main characters, there’s warm and pleasant goofiness to the town of Sunshine and the gentle romance between Drew and Lola. The Sunshine Valley Widows Club probably deserves most of the credit. They steal every scene and have perfect timing with comedic relief or a meaningful word. The biggest hurdles for readers’ patience will be Lola’s constant doubting of her own agency, even when it means admitting she made bad decisions, and how the slow-burn romance truly stretches the definition and nearly puts this into cozy women’s fiction territory.

An average romance that makes up for it with a lively, comedic cast.