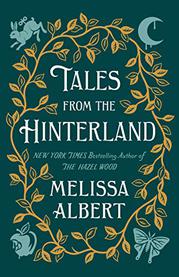 TALES FROM THE HINTERLAND

From the Hazel Wood series, volume 2.5

Fans of the Hazel Wood series know of Althea Proserpine’s cult anthology, the original stories whose characters escaped into our world. Featuring, among others, Hansa the Traveler, Twice-Killed Katherine, and, of course, Alice-Three-Times (whose tale’s much-speculated-about ending falls oddly flat), the stories feel both familiar—the first was already included in its entirety in the series opener and several others, in abbreviated and altered form—and revelatory, unfolding in all their rich, lush, macabre, and grisly glory. Despite their vaguely preindustrial Western European setting, these are anything but traditional folktales. While every protagonist is female, the themes are not explicitly feminist; rather, the overwhelming tone is savage, angry, bitter, and cruel. Most of the leads do achieve a vicious and vengeful sort of triumph, but only one even approaches a conventional happy ending. Relationships (exclusively heterosexual) are only an excuse for male lust, domination, and manipulation. Parents (especially mothers) are mostly neglectful, smothering, abusive…or dead. Death, often horrific death, is a constant presence, even as a literal character in several stories. Although this collection could well be read on its own, the unrelenting grimness can be wearying; it may be best appreciated for the context and commentary it offers for the preceding volumes. Tierney’s bold illustrations, many featuring stark, contrasting tones of red, black, and white, accentuate the mood. There is some diversity in skin tone.