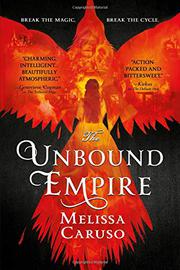 Caruso completes her epic Swords and Fire trilogy (The Tethered Mage, 2017; The Defiant Heir, 2018), based in a Venice-like city at the heart of an empire where magic can be wielded like a weapon.

Sadistic (and, unfortunately, immortal and nearly invulnerable) Witch Lord Ruven of Vaskandar prepares to launch the large-scale invasion he’s been threatening for two previous books, infiltrating Raverra via the dangerous magical hybrids known as chimeras and an alchemical potion that puts the drinker, however reluctant, under his control. Meanwhile, Lady Amalia Cornaro, a young Raverran noblewoman with an unorthodox link to the fire mage Zaira, works to convince the Serene Imperial Assembly to pass a law freeing mages from government control, a tricky proposition given that mages are the Serene Empire’s best defense against the Witch Lords’ magic. She’s also still torn emotionally between Marcello, the Falconer Captain she loves, who is politically unsuitable as a husband, and a somewhat better match, Kathe, the mercurial and not entirely trustworthy Witch Lord she’s beginning to care for despite herself. The personal and the political converge explosively as Ruven’s plans come to dreadful fruition: He transforms Marcello into a chimera forced to obey his will and strike at Amalia where she is most vulnerable. Amalia must depend on both Zaira and Kathe to protect and support her as she puzzles out how to defeat this seemingly indestructible foe while trying to guard both her heart and integrity from further injury. Once again, Caruso admirably refuses to pull her punches, for the most part. Bad things happen to good people and choices have real consequences. The book convincingly and compellingly completes Amalia’s transformation from a shy, scholarly young woman reluctant to grasp the reins of power into a capable politician willing to do what is necessary and expedient even if it means a personal sacrifice. Caruso’s writing has also grown in complexity and nuance as the author has charted Amalia’s course.

Thrilling while remaining both emotionally and logically true; readers will regret bidding farewell to Amalia and her friends.