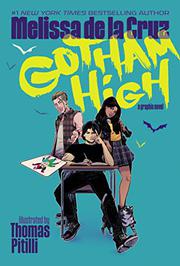 Seventeen-year-old Bruce Wayne just got kicked out of the fancy boarding school his Uncle Alfred sent him to when his parents died. Now he’s back in Gotham City, living in the family home and attending Gotham High. Bruce runs into his childhood neighbor Selina Garcia Kyle, who invites him to a party where he meets cardsharp Jack Napier, who becomes a new friend. One day, high school classmate Harvey Dent is kidnapped while trying on Bruce’s leather coat, and Bruce gets shot with a tranquilizer dart. Bruce, convinced he, not Harvey, was the real target, goes on a hunt to find the truth. As he uncovers more information, he discovers that his new friends aren’t what they seem. Narrated by Selina, the story puts Batman, the Joker, Catwoman, and other Batman favorites into a teenage setting, giving them more of a backstory. De la Cruz’s (The Queen's Assassin, 2020, etc.) graphic-novel debut is dark and alluring. The characters do what they need to survive, creating suspense. Pitilli’s (Archie, 2019, etc.) vivid and captivating illustrations are the highlight of this graphic novel, and the darker palette adds to the ominous feel. Bruce’s mother was Chinese from Hong Kong, and his father’s ethnicity is not specified; Selina is Latinx, and there is diversity in secondary characters.