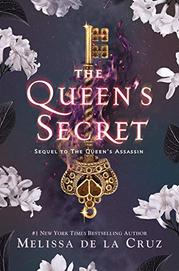 Romantic fantasy turns into lovelorn politicking in this duology closer and follow-up to The Queen’s Assassin (2020).

Formerly feisty assassin-in-training Shadow is now Queen Lilac of Montrice, still secretly meeting her lover, Chief Assassin Caledon Holt, while managing to avoid her (nice, hound-loving) husband. But the evil Aphrasian monks are still a threat, and when Cal rides off with attractive apprentice Rhema, 19-year-old Lilac fears she’s lost him. Cal’s adventures take him back to Renovia and to the frightening Aphrasian stronghold of Baer Abbey; Lilac, previously accustomed to a similarly adventurous life, feels increasingly imprisoned in the Montrician castle. While the somewhat flimsy fantasy world offers some decent adventure and intrigue, most of the alternating narrative (Lilac’s in first-person present tense, Cal’s from close third-person) consists of the lovers’ being jealous and angry while circumstances hold them apart while Lilac works much harder to avoid consummating her year-old marriage than she does to govern. Sometimes-awkward writing, usually due to the limitations of present-tense narration, inconsistent characterization, and uneven pacing plague the text. Physical descriptors are few and far between, but the world is established as diverse in terms of race (for example, Lilac’s mother is dark-skinned) and sexuality (Lilac’s aunt is in a same-sex marriage).