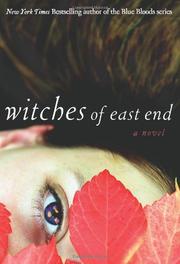 From the Witches of East End series, volume 1

First in de la Cruz’s debut adult series about the adventures of a family of Long Island witches.

The author, known for her Blue Bloods YA series featuring undead Manhattan debutantes, again does not have to stretch for likely settings—the Hamptons are the ideal home base for the Beauchamps, a mother and two daughters, longtime residents. Quite a longtime in fact—ever since Salem witch hunters hanged the two daughters, Ingrid and Freya, who were later reborn to their mother, Joanna. After Salem, witchly higher-ups restricted the open deployment of magical powers. The Beauchamps are so deep undercover that the community they inhabit, “North Hampton,” does not appear on any map. This Hampton is refreshingly devoid of rich people until two brothers, Bran and Killian, arrive to restore Fair Haven, their ancestral mansion. Freya, a bartender, recognizes an ancient soul mate in Bran, and they announce their engagement at a lavish Fair Haven party. Nevertheless, she can’t resist shagging preternaturally handsome Killian in the bathroom during the party. Public librarian Ingrid is chafing at the magic ban—with a simple incantation, she could easily cure a distraught co-worker’s infertility. Soon Ingrid is exchanging salutary spells for contributions to the library fund. When she’s not torn between two lovers, Freya lapses back into her own peculiar brand of magic—her aphrodisiac cocktails perform as advertised. Most daringly of all, Joanna raises a local artist from the dead. But once unleashed, the white magic provokes dark retribution: An undersea miasma is killing off fish and wild life, children are contracting a deadly influenza, vampires (vacationing Blue Bloods?) are infiltrating and the police are “liking” the witches for homicide. But this is secular 21st-century New York, not puritan colonial Massachusetts. Things have changed—haven’t they? A decidedly weird mishmash of mythologies, a serpentine plot and a thicket of back stories intertwine as de la Cruz sets up the continuing saga, but it all gels magnificently.