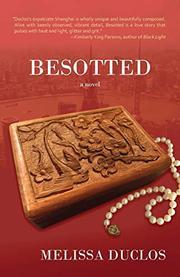 In this debut novel, two women experience life, love, and loss as expatriates in Shanghai.

Sasha moved to Shanghai a few years ago to get away from her overbearing father. Liz arrives in China looking for something to shake up the predictability of her life. Both working at the same international school, Liz gratefully moves into Sasha’s spare room and the two become roommates, friends, and eventually lovers. They explore the expat community of Shanghai, a raucous group of English speakers that meet in bars every week to party and remind themselves they’re not alone, including Dorian, an architect and longtime acquaintance of Sasha’s who wants to put down roots. Liz, meanwhile, has made her own friend: Sam, a Chinese language-exchange partner who wants more from Liz than just help with his English. The book is told entirely from Sasha’s point of view, a kind of omniscient first person that takes a little bit of getting used to while also creating distance from the other characters, as the reader is unsure if they are getting an accurate picture of events or just Sasha’s thoughts on what might have happened. The relationship between Sasha and Liz, in theory the heart of the novel, is hard to connect to, as readers hear only one side of the story and many more anecdotes about fights and misunderstandings than moments of connection and love. The true star of this piece is the expat community that Duclos has perfectly drawn. Any expat who has spent an amount of time in Asia will find at least something in there that speaks to their own experience. The worldbuilding is excellent.

Though the love story is a bit hollow, the parts about living as an expat in China ring true.