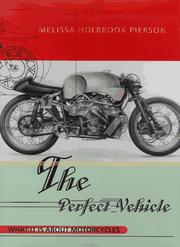 What It Is About Motorcycles

An entertaining vade mecum for the aspiring Dennis Hopper, Evel Knievel, or Malcolm Forbes of the family. Magazine journalist Pierson sets out to explore the motorcycle mystique, her account ranging from peeks at by now tired icons like the Marlon Brando of The Wild Ones to fresher elements like the nascent French biker culture. (The French, of course, have an elaborate classification system to distinguish true bikers from les sportifs, the sham articles.) She calls the fixation with bikes ``motolust,'' and she admits to being a victim herself, one of the growing number of women who reject the phallic-substitute imagery long associated with ``chicks on bikes'' for what is, all in all, a fun ride in the open air. Pierson takes the reader on wild spins, hitting cross-country races and motocross tournaments up and down the East coast, cataloging the thrills and, especially, the manifold dangers that await, all the little things that can quickly send a biker to the grave: ``wet leaves, gravel, sand, decreasing-radius turns, painted lines, tar patches liquefying in the sun, antifreeze, oil deposits at gas stations or toll booths, metal plates and manhole covers made deadly by rain . . .'' Pierson is often funny, frequently deep, occasionally sharp-edged, and almost always right on the money. She is also fully aware of her minority status within a minority culture—as she notes, only 7 million Americans ride motorcycles, as against 20 million who call themselves bird-watchers—and she does her best to convey the spirit of motorcycling to the countless uninitiated. You don't have to be a two-wheel devotee to appreciate Pierson's work, but it probably helps. Still, even if you don't much care for motorcycles—or your mother wouldn't let you ride one—this engaging treatise (part of which appeared in Harper's) is worth a look. (photos, not seen)