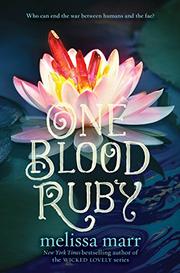 Marr (Seven Black Diamonds, 2016) continues the story about tension among various factions of the fae and their fight against humans.

This sequel absolutely requires knowledge of the first book if readers are to make any sense of it. In rapid succession, the author presents a bewildering array of variously human and magical characters—so many that it is difficult to discern a plot. Each of these characters appears to be involved in a one-true-love type of romance with another character. Protagonist Lily is in love with a musician called Creed, Alkamy loves Zephyr, Eilidh loves Torquil, and Will loves Roan. (Marr treats the last, gay romance equally although not as fully as the others.) And there’s also Violet, Erik, Rhys, and Leith, the third-person perspective alternating among these different characters in turn as they ponder their emotions and occasionally act. Adding to the confusion, most of these characters speak in identical voices, with the notable exception of the Queen of Blood and Rage, who rages rather well. Each of the magical characters has some kind of affinity to water, air, earth, or fire, and the author spends large portions of the book explaining these affinities, continuing to explain them even after 200 pages have elapsed. When action finally occurs, attacks tend to happen suddenly and without warning, out of the blue. The ruby of the title finds only a single, brief reference.