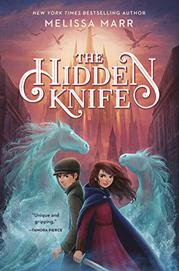 A gifted heroine must fulfill her destiny, no matter how fraught.

Vicky is the middle daughter of Kat Wardrop, a notorious ex-Raven guard of Queen Evangeline—and the only one to ever leave her service. Advised by a shadowy group called the Collective, the queen wants new Raven recruits to attend the Hogwarts-like Corvus School for the Artfully Inclined. As her daughter shows prowess in both combat and magic, Kat wants to shelter Vicky from Corvus and let her choose her own path. When a sudden and devastating event forces Vicky into attending the school after all, she, desperate with grief, makes a rash decision that could alter the fate of the entire kingdom. Marr’s splashy offering is packed full of an extensive array of beloved fantasy tropes ranging from mystical creatures like gargoyles and kelpies to a magical boarding school, alchemists, thieves, and portals to other worlds. While certainly a crowd pleaser, the plotting tends toward being overcrowded to the point of cliché, but the fast-paced chapters, each narrated from a different point of view, help move everything along. Echoing elements from series like Harry Potter and Nevermoor, and even Disney’s Frozen franchise, this will be popular with a wide swath of readers. Main characters read as White.

A veritable buffet of fantasy conventions.