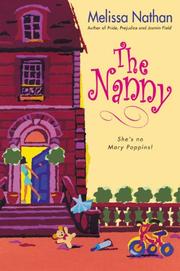 No, no, not that New York Nanny—an English one. Sort of like Bridget Jones, but not so jaded, with unmistakable echoes of I Don’t Know How She Does It and other chick-lit classics.

Gather round, twentysomethings, and identify with spunky Jo Green, who leaves the peaceful village where she grew up, tired of the same old crowd at the same old pub, ready for something, anything, new. Bidding her mates and devoted boyfriend good-bye, she arrives in London, awed by the great city—but unimpressed by the beleaguered parents who hire her about a minute after their last nanny quit. Vanessa, an advertising exec, loathes all aspects of mommydom and openly prefers her clever colleagues to Dick, her henpecked husband. The Fitzgeralds indulge themselves endlessly in vicious bickering, which troubles Jo, though she soldiers on bravely nonetheless, somewhat comforted by her own suite, huge TV, and sole use of a Renault. The three adorable children are a handful, of course; and so Jo seeks advice from the other nannies, English and foreign (all accents duly noted and elaborately mocked). The young women dish on their obnoxious employers, confess to crushes on the better-looking husbands, and tell wide-eyed Jo how to wangle days off and perks such as facials and aerobic classes. Despite her devoted boyfriend’s pleading, Jo hopes to find new love with her new life. Conveniently, Josh, Dick’s grown son from a previous marriage, moves back home to (she thinks) sponge off his father. Josh breaks his leg, the two bond over heaps of ironing, and at last the truth is revealed: Dick has been unable to keep up his share of expenses, and Josh, a successful accountant, has been secretly slipping him money so dear old dad won’t incur the simmering wrath of his bitchy wife. Can the marriage be saved? Will wedding bells ring for Josh and Jo?