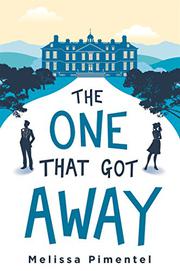 THE ONE THAT GOT AWAY

Pimentel (Love by the Book, 2015, etc.) joins the ongoing modernized–Jane Austen trend with this take on Persuasion.

With broader and less vibrant strokes than Austen, Pimentel paints a picture of Ruby Atlas, a 32-year-old New Yorker who humbly considers herself a success by the city’s tough standards: she has a consuming job at an advertising firm, her own tiny apartment in the East Village, and even a personal trainer, all hard-won. Conversely, Piper, her younger, perfectionist sister, will soon have a storybook wedding at a castle in England. As Ruby prepares to leave for the wedding, she is terrified of seeing one of the guests, her first love, Ethan, now a wildly successful tech guy and best friend of the groom. The prospect amps up a load of insecurities for Ruby, both professional and romantic. Readers of Persuasion will know where this is headed, and those unfamiliar will easily guess. Emotional self-preservation leads both parties to pretend they no longer matter to each other, which gives Ruby plenty of time to tend to her difficult family and fix a series of wedding-related disasters. It’s not until her father has a health scare that the stakes are high enough, and Ethan solicitous enough, for Ruby to admit how she feels. Alternating flashback chapters illuminate Ruby and Ethan’s young, ardent relationship and build to what ultimately drove them apart. Some of these reasons are quite poignant, stemming from Ruby’s unforgiving expectations of herself as a young person building an adult life. Unfortunately, a late-revealed piece of the puzzle involves sexual assault, which the novel handles in a troublingly retrograde way.

Aside from the problematic ending, a serviceable, well-paced romance.