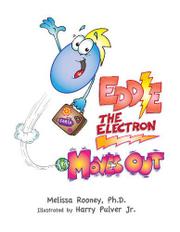 EDDIE THE ELECTRON MOVES OUT

From the Eddie the Electron series, volume 2

A subatomic narrator describes how helium, a nonrenewable resource, is formed deep underground.

The very simple cartoon style of the illustrations suggests a breezier ride than the scientifically challenging content delivers. With much reliance on explanatory endnotes, Rooney sends her zippy narrator—newly freed from a popped balloon (see Eddie the Electron, 2015)—barreling its way past billions of nitrogen and oxygen atoms to the top of the atmosphere. Eddie describes how uranium and thorium trapped in the newly formed planet’s crust self-destructed to leave helium as a stable byproduct. Billions of tedious years later (“I thought I would die of pair annihilation!”) that helium was extracted for a wide variety of industrial uses. Following mentions of Einstein and how Eddie is mysteriously connected to other atoms “in a way that surpasses space and time,” the popeyed purple particle floats off with a plea to cut down on the party balloons to conserve a rare element. Younger readers may find this last notion easier to latch onto than the previous dose of physics, which is seriously marred both by the vague allusions and by Eddie’s identification as a helium atom rather than the free electron that his portrayals in the art, not to mention his moniker, indicate.

A sketchy teaser in search of an audience.