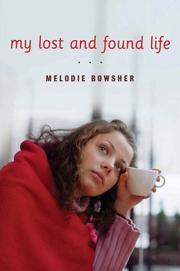 MY LOST AND FOUND LIFE

The travails of a suddenly poor little rich girl fail to sparkle. Debut author Bowsher has a great concept: Wealthy, spoiled 17-year-old Ashley’s mother is accused of embezzling millions and disappears, forcing Ashley to give up her material girl existence, get a job and move into her mother’s ex-boyfriend’s camper van behind his gas station. But she finds that self-reliance has benefits, including romance with an older Irishman. Unfortunately, the writing is dry and obvious; rather than saying things, characters tease, jibe, quip and so on. Narrated five years after the events of the story, there is little sense of Ashley now, although she says she has grown and changed. Some solid elements, such as the odd cast of characters she falls in with, are lost in ineffective plot points (a fire, a collapsed lung) and a lack of depth. For a better take on the glitzier side of an absentee parent, try Michael Simmons’s Finding Lubchenko (2005), or Martha Brooks’s True Confessions of a Heartless Girl (2003) for finding a new “family” in unexpected places. (Fiction. YA)