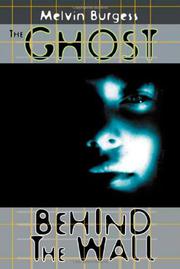 THE GHOST BEHIND THE WALL

A bored boy finds diversion and danger in the ventilation ducts of his apartment building. David, short and defensive about it at 12, lives with his optician father, whose schedule leaves David home and alone much of the time. When a stray gust makes David aware of the possibilities of the ducts, he begins to explore the building from within, crawling from apartment to apartment and engaging in minor vandalism. At the beginning, it’s just a naughty lark, but then he becomes aware of another presence in the ducts. It’s a ghostly boy who seems to want a friend, but who is malignantly hostile toward Mr. Alveston, an ancient tenant who is simply waiting out the end of his days. When the ghost, energized by David’s illicit presence, wrecks Mr. Alveston’s apartment, a subsequent intervention results in an unlikely friendship between young and old. Burgess (Lady: My Life as a Bitch, 2002, etc.) offers a quiet, odd little story full of musings about memory and age. The ghost itself becomes the embodiment of Mr. Alveston’s lost memories—a revenant indeed, but from before the grave rather than beyond. Characterizations are deft (“David was looking forward to behaving worse than he ever had in his whole life”) and sympathetic, with young, old, and in-between rendered believably and sympathetically. Whether the device of the ghost truly moves beyond artifice is questionable—but the loveliness of the relationship between the young and the very old, and the very real meeting of the minds therein, is spot-on. (Fiction. 9-12)